WHY SEXUAL VIOLENCE IS SRI LANKA MUST BE URGENTLY CONFRONTED

As the Global Summit to End Sexual Violence in Conflict meets in in London, the question of ongoing sexual violence in Sri Lanka could not be more immediate – and the need for action more urgent.

Both the Global Summit and the international inquiry being set up by the UN are welcome and vital events.  But the appalling crimes of sexual violence which characterized the end of the war in Sri Lanka continue today against the Tamil civilians of the north and east, as well as against returned asylum seekers.

Everyone who cares about ending sexual violence in conflict must use these important international events to focus attention on the need to end the climate of impunity in Sri Lanka.

Because in Sri Lanka today this climate of impunity has not just allowed the government to deny and cover up the crimes committed by its troops during the war – it effectively encourages the continuing use of rape and sexual violence as a weapon of repression and a cultural assault on Tamil society.

The genuine expression of horror and condemnation of sexual violence in conflict represented by the Global Summit must be translated into international action.  And the grotesque sexual violence in Sri Lanka – both historic and current – cries out to be one of the most urgent and important examples of such action.

WHAT YOU CAN DO

Everyone who cares about this issue should be calling on their political leaders not just to make general statements of principle against sexual violence – but to make an immediate and public stand on the issue of sexual violence in Sri Lanka.

Finally you should watch the full feature documentary, No Fire Zone – which uses powerful personal testimony and often distressing and disturbing video footage shot by survivors and perpetrators themselves to describe the terrible last 138 days of the war – and the repression that continues.

For details of how to watch the film click here

The last few days of the war were characterized by a series of terrible war crimes involving the systematic use of sexual violence and the cold-blooded execution of often bound and blindfolded prisoners.

Among those who were sexually assaulted are these two women. One of them is the Tiger TV presenter, Isaipriya, seen here, guarded by Sri Lankan soldiers in a new photograph which has only recently emerged.   Later both women are seen dead, stripped, blindfolded, sexually assaulted and then executed. 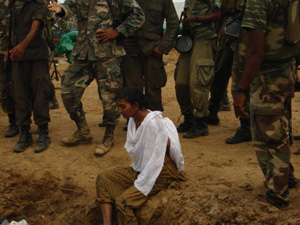 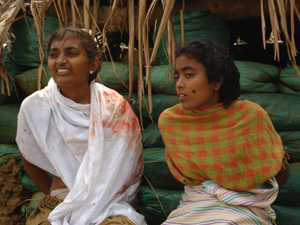 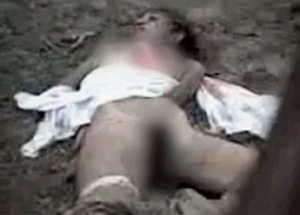 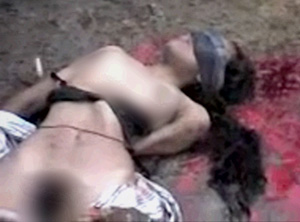